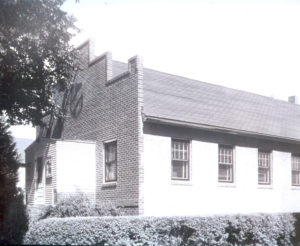 In 1937, a group of five men, voted to form Mt. Calvary Lutheran Church, the first Missouri Synod congregation in Holdrege. Their 1st meeting place was the Salvation Army Chapel, at 514 East Ave. Mt. Calvary was a mission church of St. Paul, Bertrand whose Pastor was Rev. Milton Matuschka. A seminarian, Herbert Schulenberg, had been working in the Holdrege area since March of 1936 and he would become Mt. Calvary’s first Pastor. 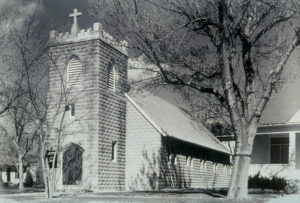 On February 2, 1940, the former Episcopal Church at 6th and Tilden was leased by the fledgling congregation. Services were held there until the summer of 1944. Pastor Schulenberg served Mount Calvary until October 12, 1941. Rev. Paul Bussert would serve as the second pastor from 1942 to 1946. 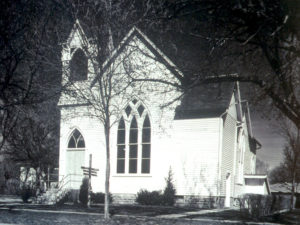 October 10, 1943, the voters discussed the purchase of the former Swedish Methodist Church at 9th and West Avenue. One month later, the property was purchased for $1,500.00.

In April of 1946, a call was extended to Rev. Walter E. Heddrich of Farnhamville, Iowa, to fill the vacancy of Pastor Bussert. In the following months, members spent many long hours, removing dirt and assisting in the construction of basements under both the church and the adjacent parsonage.

Under Pastor Heddrich’s guidance, Mt. Calvary moved from a subsidized Mission congregation to a self-supporting church in the early ’50’s. In January 1954, Pastor Heddrich asked to be released to accept a call to Jansen, Nebraska.

E.P. Kauffeld, a recent graduate of Concordia Seminary at St. Louis, was installed and ordained as the new shepherd of Mount Calvary on June 20, 1954. It would be during his service as pastor the site of our present church was selected.

In December of 1957, Pastor Kauffelt asked to be released to accept a call to Mankato, Minnesota. 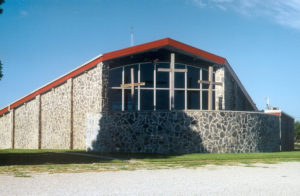 The Rev. Roy Bleick, formerly of Wauneta, was installed as Mount Calvary’s pastor on June 29, 1958. One of the highlights of his years of service would be the completion of our present church at 1419 East Avenue Drive.

On Sunday, January 21, 1962, Mount Calvary celebrated its Twenty-fifth Anniversary in its new church home. Pastor Bleick accepted a call to Grace Lutheran in Chicago, Illinois in October of 1964.

Rev. Virgil W. Brack came to Holdrege from Plainview in February of 1965. The Bracks were the first family to reside in the present parsonage at 1402 East Avenue Drive. Pastor Brack remained until March of 1974 when he was called to Pomeroy, Iowa.

Rev. LaVern Bellamy came to us via Casper, Wyoming and was installed on August 4, 1974. A major renovation of the present facility came in March of 1980 when we installed the new 15 rank pipe organ. In April of 1983, Pastor Bellamy was released to serve as the “Planned Giving Counselor” for the Nebraska District in Seward.

Rev. Larry Borgelt was installed in December of 1983 as the seventh pastor of Mount Calvary. Called from Vandalia, Missouri, he became our fourth “Pastor B”. In the fall of 1986, Mount Calvary continued to expand it’s out-reach to the members by offering two worship services each Sunday. Pastor Borgelt served until 1988. Rev. Daniel Fienen was called in September of 1988 and served until December of 1999.

Rev. Kenton Birtell came to us in September of 2000. In 2005, a large, new Fellowship Hall wing was added to the church. At that same time, the pipe organ was completely restored and enlarged and a new sound system was added.

Rev. Kenton Birtell continues to serve as Mt. Calvary’s Pastor. He is assisted by Pastor Dan Wiese and Director of Children’s Ministries, Ann Anderson. As Mt. Calvary continues to grow, we strive to fulfill our ministry statement, “Bringing the Good News of Jesus to All People”.

Prayer is talking to, asking, and honoring God. The Bible says that God listens to those who pray to Him and we would love to pray for you. Please call the church office at 308-995-2208 to request prayer.

"Bringing the Good News of Jesus to all people for the first time and a lifetime."

Mount Calvary is a member congregation of The Lutheran Church Missouri Synod.